Qi et al. (2015) analyzed 2 years (2011–2013) of measurements of submicron particles (6–800 nm) at a suburban site in the western Yangtze River Delta (YRD) of eastern China. The number concentrations (NCs) of particles in the nucleation, Aitken and accumulation modes were 5300±5500, 8000±4400, 5800±3200 cm-3, respectively. The NCs of total particles are comparable to those at urban/suburban sites in other Chinese megacities, such as Beijing, but about 10 times higher than in the remote western China. Long-range and regional transport largely influenced number concentrations and size distributions of submicron particles. The highest and lowest accumulation-mode particle number concentrations were observed in air masses from the YRD and coastal regions, respectively. Continental air masses from inland brought the highest concentrations of nucleation-mode particles. 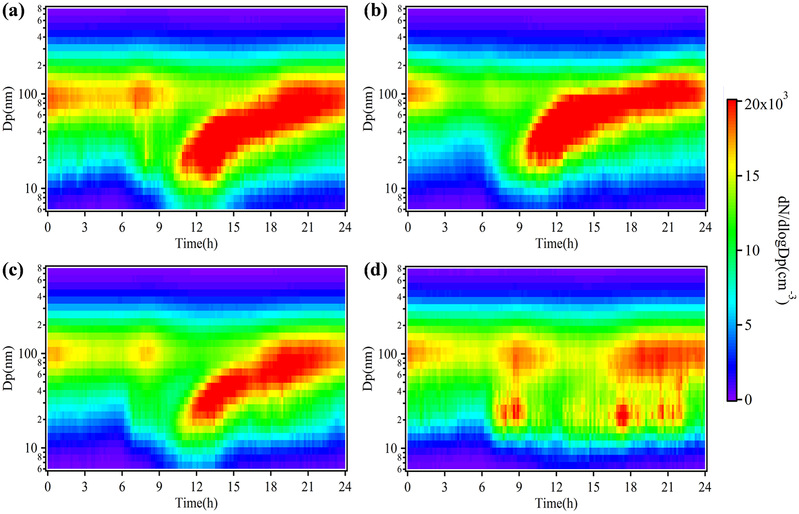 Figure 1 Averaged diurnal cycles of particle number size distributions for (a) spring, (b) summer, (c) autumn and (d) winter at the SORPES station during the 2-year measurement period. 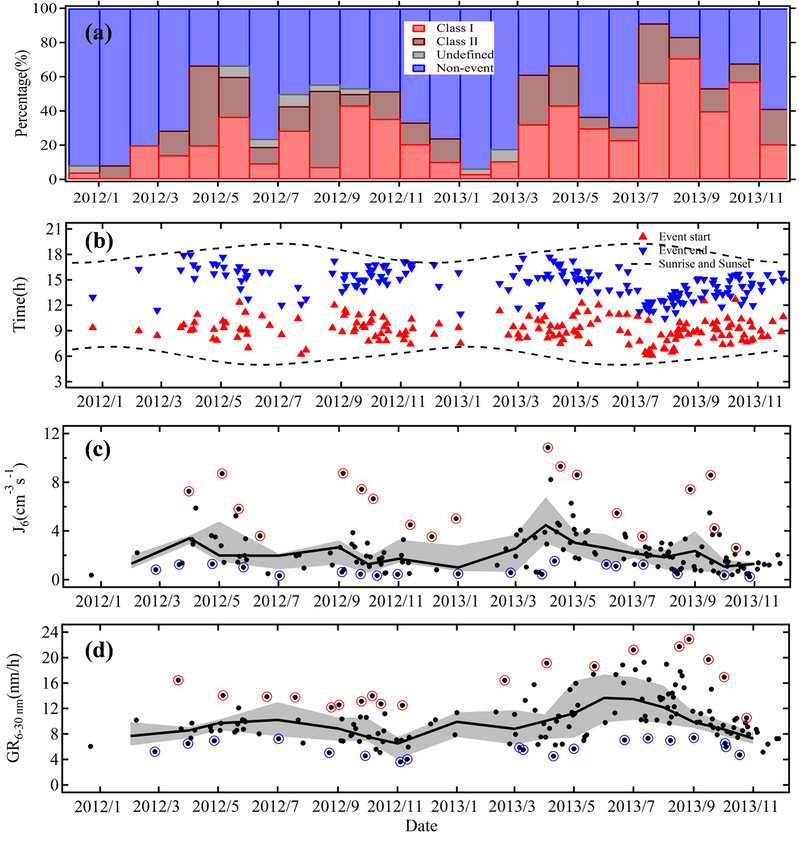 New particle formation (NPF) events, apparent in 44% of the effective measurement days, occurred frequently in all the seasons except winter. The frequency of NPF in spring, summer and autumn is much higher than other measurement sites in China. Sulfuric acid was found to be the main driver of NPF events. The particle formation rate was the highest in spring (3.6±2.4 cm-3 s-1), whereas the particle growth rate had the highest values in summer (12.8±4.4 nm h-1). The formation rate was typically high in relatively clean air masses, whereas the growth rate tended to be high in the polluted YRD air masses. The frequency of NPF events and the particle growth rates showed a strong year-to-year difference. In the summer of 2013, associated with a multi-week heat wave and strong photochemical processes, NPF events occurred with larger frequency and higher growth rates compared with the same period in 2012. The difference in the location and strength of the subtropical high pressure system, which influences the air mass transport pathways and solar radiation, seems to be the cause for year-to-year differences. This study reports, up to now, the longest continuous measurement records of submicron particles in eastern China and helps to achieve a comprehensive understanding of the main factors controlling the seasonal and year-to-year variation of the aerosol size distribution and NPF in this region.