Aerosol-cloud interactions play an important role in the climate system and affect the global energy budget and hydrological cycle. The effective radiative forcing from aerosol-cloud interactions (ERFaci), which includes the instantaneous effect on cloud albedo from changes in cloud condensation nuclei (CCN) or ice nuclei and all subsequent changes to cloud lifetime and thermodynamics, remains one of the largest uncertainties in our estimates of anthropogenic radiative forcing. To better estimate the effective radiative forcing from aerosol-cloud interactions, it is important to better quantify the uncertainties of aerosol indirect forcing in climate models. On the other hand, because of the inherent limits of global climate models for simulating aerosol indirect effects, observations are usually used to constrain the model estimates of aerosol indirect effects. It is therefore also important to quantify uncertainties in observations and to find better ways to constrain aerosol indirect forcing using observations.

Zhang et al. (2016) have examined the regime-dependence of aerosol indirect effects (AIE) over global oceans (from 60oS to 60oN) in different climate models. Model results are sorted into different dynamical regimes, characterized by the monthly-mean mid-tropospheric 500hPa vertical pressure velocity (ω500), lower-tropospheric stability (LTS, θ700hPa-θsurface) and surface precipitation rate. The response of liquid water path (LWP) to aerosol perturbations, λ=dlnLWP/dlnCCN, a metric to quantify cloud lifetime effect of aerosols, shows a large spread within dynamical regimes among GCMs, indicating that the aerosol cloud lifetime effect is regime-dependent. It is in strong ascending regimes and subsidence regimes that λ differs most between GCMs (Figure 1). Stratocumulus regimes have traditionally been the focus for studying aerosol indirect effects because of their significant cooling effect in climate system. However, their results highlight that regimes with strong large-scale ascent should be another important regime to focus on in the future. 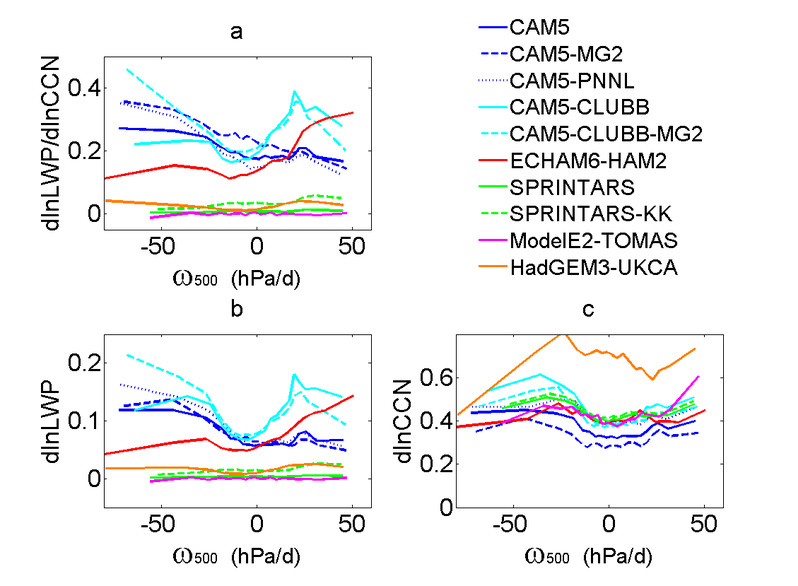