The direct and indirect effect of aerosols can alter the photochemical reactions and ozone concentration. For instance, absorbing aerosols were found to be able to reduce the photolysis rate and weaken ozone generation, while scattering aerosols showed opposite change. Further, a significant attenuation (>50%) in ultraviolet (UV) radiation due to atmospheric aerosols in polluted and urban areas has been reported. Such an attenuation of UV radiation by aerosols can exert a significant influence on photolysis and species chemical cycles, especially photochemical reaction processes. The brown carbon (BrC) emitted from biomass burning diminishes UV-B radiation strongly. Thus, accurate estimation of aerosol optical properties (AOPs) and BrC contribution could benefit for secondary aerosol formation and haze studies.

They analyzed the spatial and temporal variation of AOPs, the relationship between AOPs and other parameter, the potential effect on radiation. The aerosol was highly scattering with an average scattering coefficient of σsp = 410 ± 320 Mm-1 and an average SSA of 0.93 for the green light. Synoptic weather dominated the cycle of AOPs in a temporal scale of 3-7 days, or defined as 'pollution episode'. The variation of AOPs during 'pollution episode' is significantly larger than diurnal and seasonal variation, some properties varies up to half even one order of magnitude.

During pollution episodes, SSA increases with the increasing fraction of secondary components. Back-scatter fraction as an indicator of particle size, shows strong negative correlation with SSA. The aerosol radiative forcing efficiency (RFE) is theoretically negatively correlated with both SSA and b. The negative correlation between SSA and b consequential cancel out their individual effect on RFE (Figure 1). The RFE probability distribution at SORPES was clearly narrower than most sites worldwide. 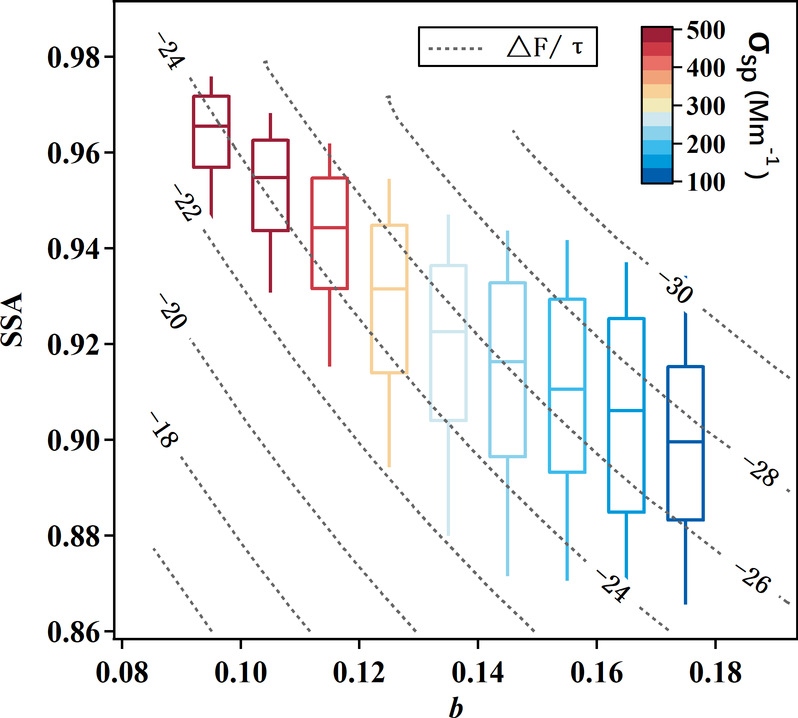 Figure 1 Relationship of SSA with the backscatter fraction and the radiative forcing efficiency at 525 nm depicted with the RFE=△F/τ isolines in Wm-2.